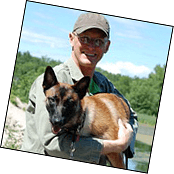 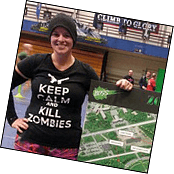 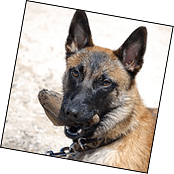 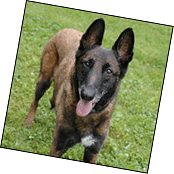 Dogs for Defense K-9 began on a very small scale not too long after German Shepherd Abby joined our family when we adopted her from the shelter in 2007. Although we previously had a series of foster dogs, Abby was the first dog that was our family dog and with whom we started getting involved in not just “dog things,” such as adoption days, rescue reunions, and hiking, but also in other activities, such as traveling and reenactment.

It was through our love for reenacting that Dogs for Defense really came to be. For those who are unfamiliar with the hobby, reenactment refers to recreating a specific period in time – for example, World War II – by dressing in period clothing, camping out with period equipment, and teaching the public about that time in history.

Soon after we began bringing Abby to reenactments, we realized that there was a great deal of interest from other reenactors and the general public about the use, training, and handling of military working dogs in the historic setting, and we started thinking, “Wouldn’t it be interesting to do a display specifically about the history of military working dogs?” This helped us shift our focus in reenactment toward preserving and presenting the history of the dogs that have helped our armed forces keep this country safe.

While living in southern Virginia, we were members of the Virginia Military Preservation Association (VMPA), an organization that serves as an umbrella group for military vehicle collectors and reenactment groups in the state of Virginia. Although the organization often registered for events as VMPA, individual member groups would register and set up displays under their own group names. We decided that we needed to come up with a designation for our military working dog display if we wanted to take the next step. We chose to call ourselves Dogs for Defense K-9, after the World War II civilian organization that helped procure dogs for the military. (That group’s actual name is Dogs for Defense.)

Our military working dog display now spans as many as three large tables and includes the history of military working dogs, military therapy dogs, and dog mascots in the armed forces. It spans the period from World War II, which was the earliest war in which the United States had a war dog program, to modern day, with a special mention to the mascots of World War I and the war dogs of other nations who influenced the American war dog program in the Second World War. The display consists of both display boards with photos and text, as well as equipment for the care and training of working dogs, and a large assortment of books, magazines, and manuals related to these dogs. (You can see scans of many of these books on our resources page.)

Toska is Chris and Brian’s current dog. Born Red Star i’Toska at Mark Keating and Irina Shimko’s Wisconsin kennel, Toska brings the best of the Belgian Malinois to the table: she is a driven, intelligent, fast-learning young dog with a natural talent for almost anything she's asked to do.

Toska was initially trained using the same methods and standards as the military working dogs in Brian's TEDD detachment before we decided to shift focus and get involved more heavily in dog sports.

Ronja was Chris and Brian’s prior Belgian Malinois. A retired police dog, Ronja joined the family in spring of 2009 at seven years old and quickly adjusted to her active retirement. Ronja was trained as a patrol dog and enjoyed bitework, playing with a tug, and chasing after balls.

Ronja earned her AKC Canine Good Citizen and her Therapy Dogs International certifications within a month of joining the family and began work as a Therapy Dog and as a canine ambassador. As a Therapy Dog, Ronja visited with soldiers and family members, and as a canine ambassador, she visited a number of civic organizations and schools to help teach about working dogs, dog safety, and bite prevention. Ronja also served as DFDK9’s demo dog for four years, until she lost her fight with cancer in October 2013.

Abby was the original dog that inspired Dogs for Defense K-9. Bred from imported parents, this German Shepherd found herself in the local shelter where she was noticed by Chris. Although she was dog reactive and had no prior training, she quickly came around and earned her AKC Canine Good Citizen and Therapy Dogs International certifications.

Abby participated in many reenactments, served as a breed ambassador, worked as a Therapy Dog at a nursing home with a program for the memory impaired, was a mascot for Army Recruiting and the poster dog for Take Your Dog to Work Day, and participated in many different dog activities, including sheep herding and rally obedience.

In 2010, Abby was adopted by Officer Wilson and his family, and enjoyed her retirement in Virginia where she passed away in spring 2017.

Chris worked in the medical field for 20 years
as a medic, a Red Cross case manager and a
critical care technician (AEMT-CC). She has
degrees in chemical dependency counseling
and military and veterans' mental health and
currently works for a school.

Chris has more than a decade of experience
training and handling dogs, which began
with volunteering as a foster and transporter
for rescue. Chris was previously active in Therapy Dog work and herding, and is currently active in many different venues, including Ringsport, WDA, obedience, lure coursing, tracking, and scent detection.

Chris enjoys educating people about history, working dogs, responsible dog ownership, and dog bite prevention. She has been a Service Dog advocate and educator for the past 10 years. In her free time, she enjoys photography, geocaching, and reading.

Chris also serves as the webmaster for this website.

Brian is a veteran of the United States Army
who retired in May 2016 after thirty years of
service.

He has done multiple overseas deployments,
including to Bosnia and Afghanistan, and
was awarded the Purple Heart for wounds
received in combat.

Brian most recently served as the kennel master for his brigade’s Tactical Explosives Detection (TEDD) detachment where he was responsible for the detachment’s dogs and handlers, a task which includes continuing training, general care and health of the dogs, and  advising units on how to use the teams to their potential.

When he is not working, Brian is passionate about educating people about history, working dogs, and fieldcraft skills. He likes to spend his weekends at reenactments and living history events, where he portrays varying time periods, or on the training field with our local dog clubs.